There were times that I never thought this day would actually arrive, but I have finally finished the family rug that I started over five years ago - what a good feeling! It's a large rug that measures 48" x 60". 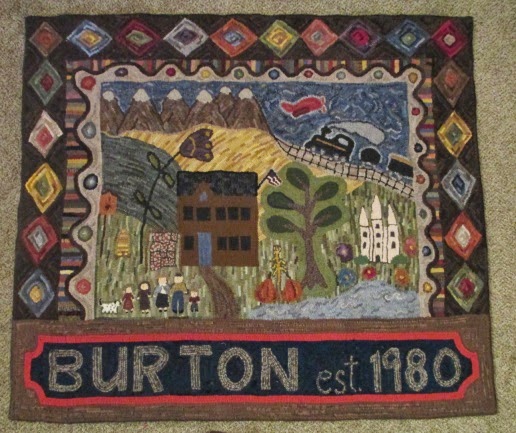 It will never win any awards but I love it because it tells our story. Hubby & I married in 1980 and moved into our home as newlyweds. We've been here ever since and raised three children and a dog. 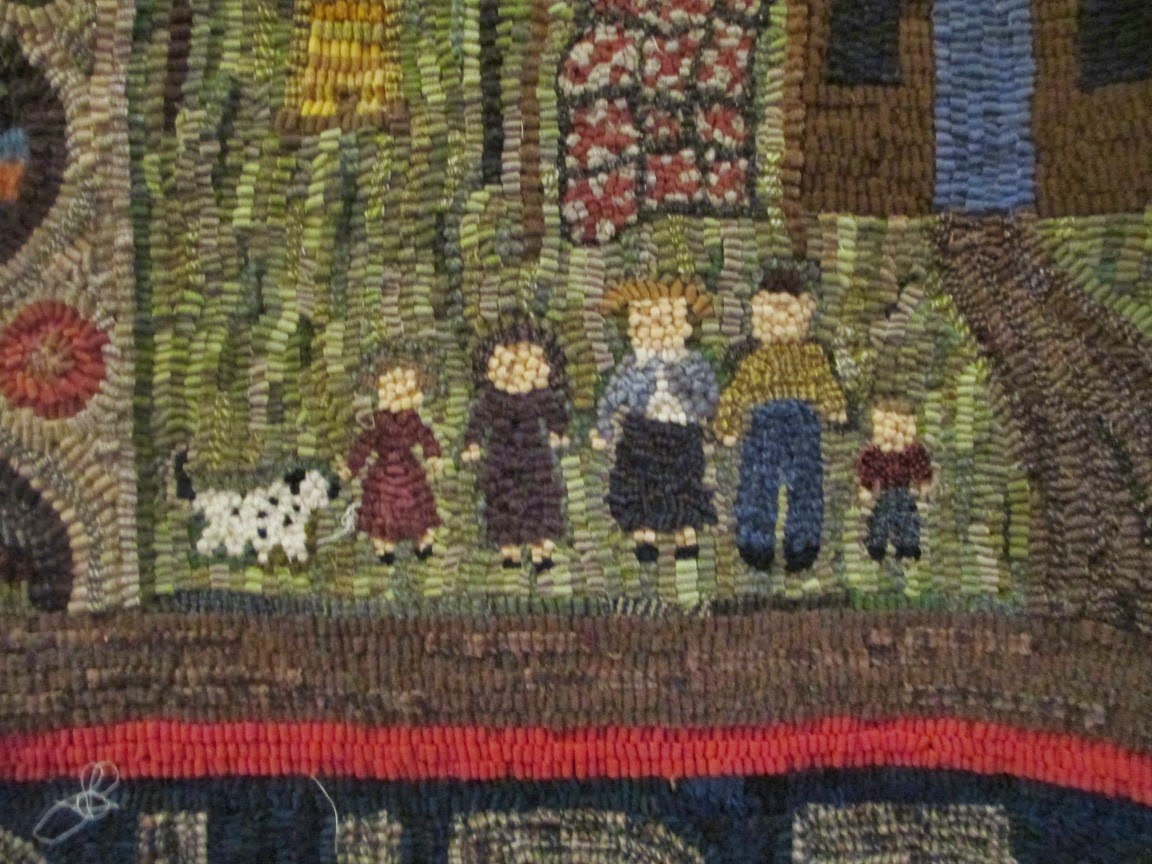 The Union Pacific Railroad runs right behind the house - the diesel trains aren't very picturesque so I hooked an old fashioned steam engine instead. We live near Hill AFB and F-16 fighter jets fly overhead often - to represent that I hooked a simple little airplane. 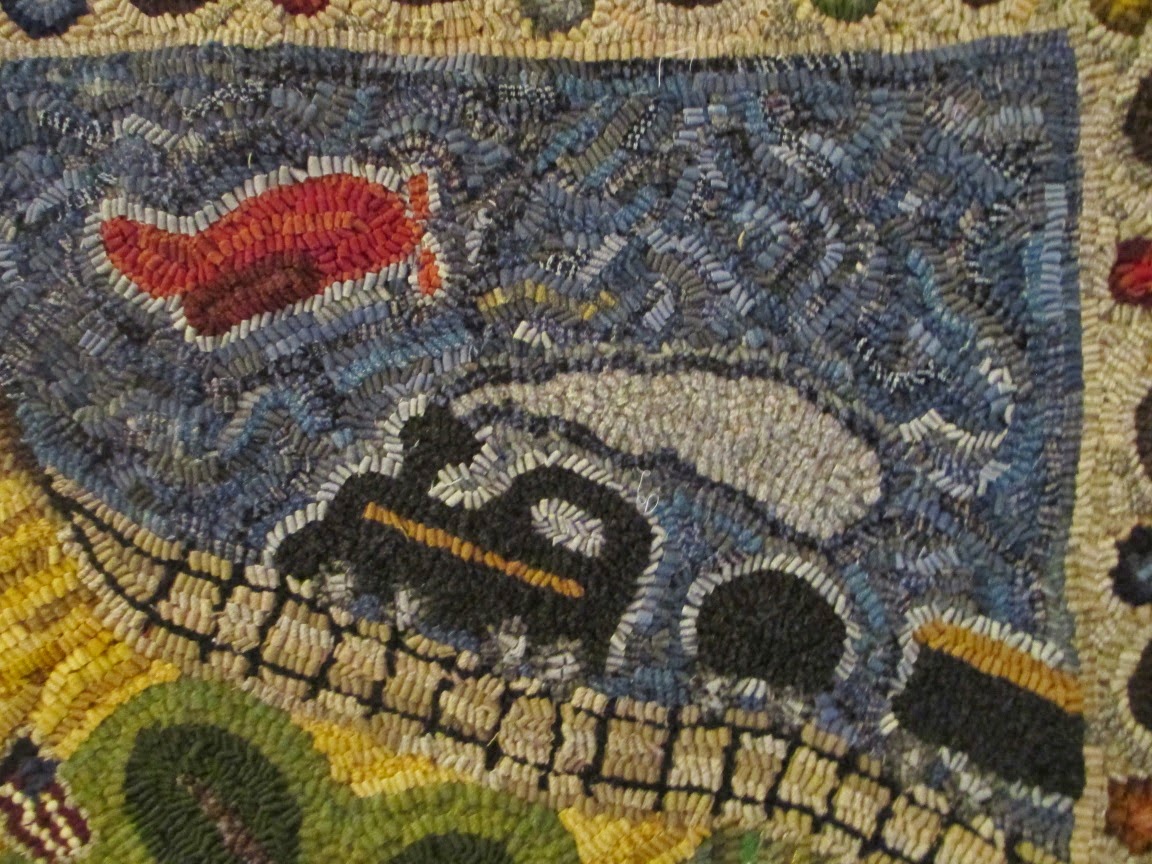 We are LDS (Mormon) so I hooked the Salt Lake Temple as a symbol of our religion - there are flowers to depict the beautiful gardens that are to be seen in every season at Temple Square. The blue below represents the Great Salt Lake. 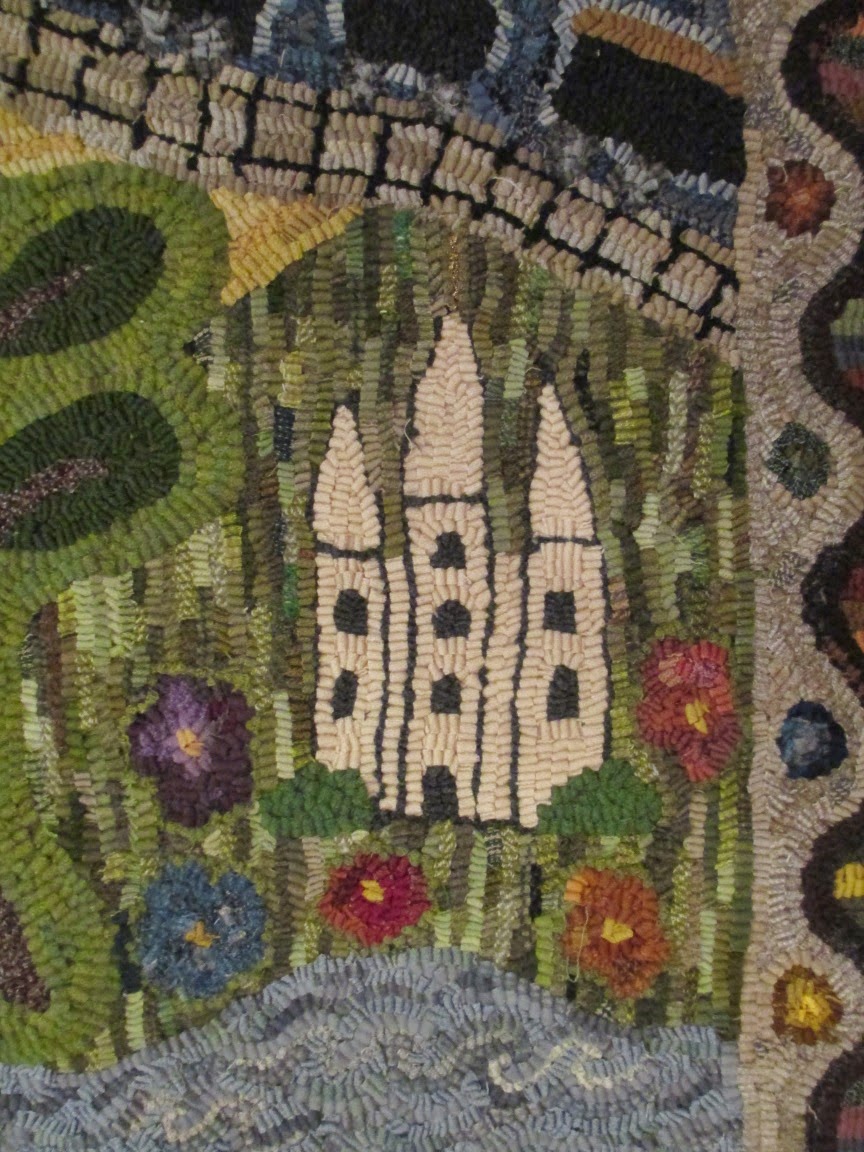 Our home is surrounded by wonderful shade trees that provided great climbing opportunities for the children and their friends as they grew - thankfully no one ever fell out and broke an arm or leg! The trees keep our home nice and cool. We also grow a garden each summer so I hooked corn & pumpkins to represent that. 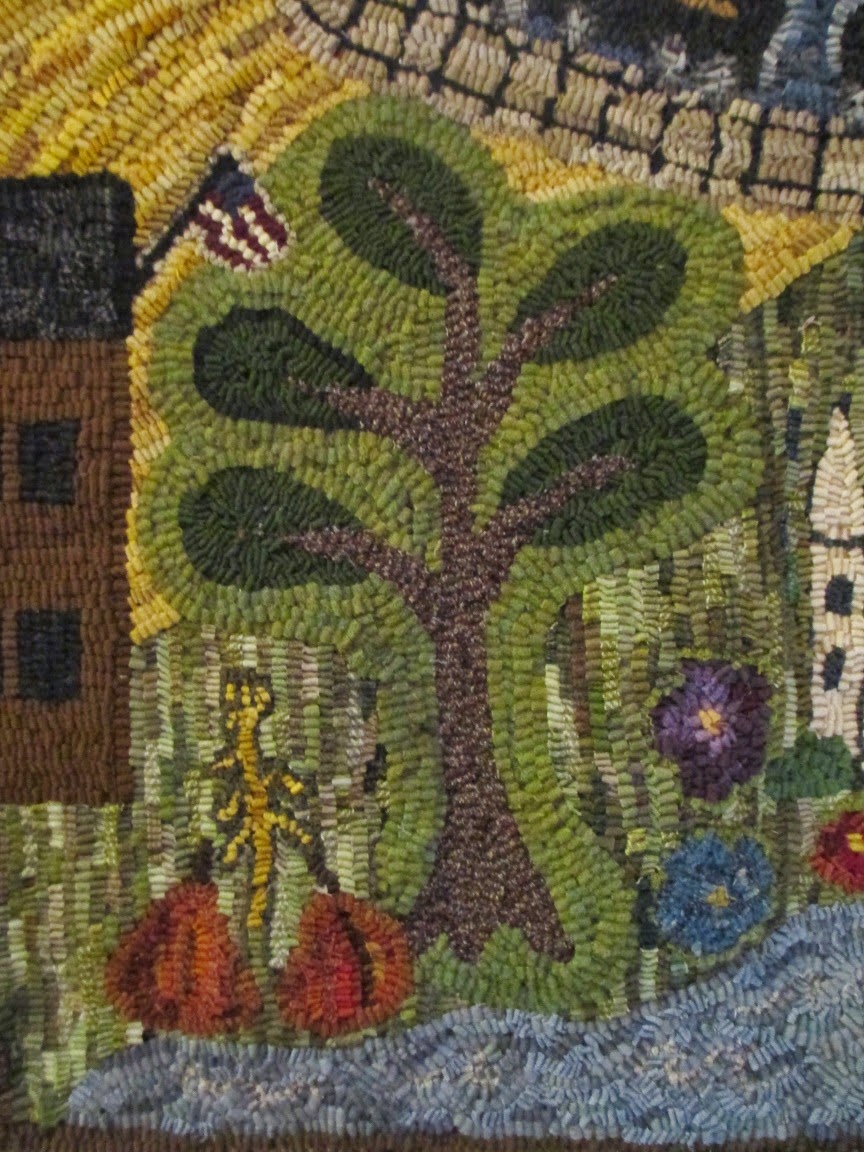 When I whipped the edge of the rug I wanted to use two different colors of yarn, and amazingly I had exactly what I needed in my stash! 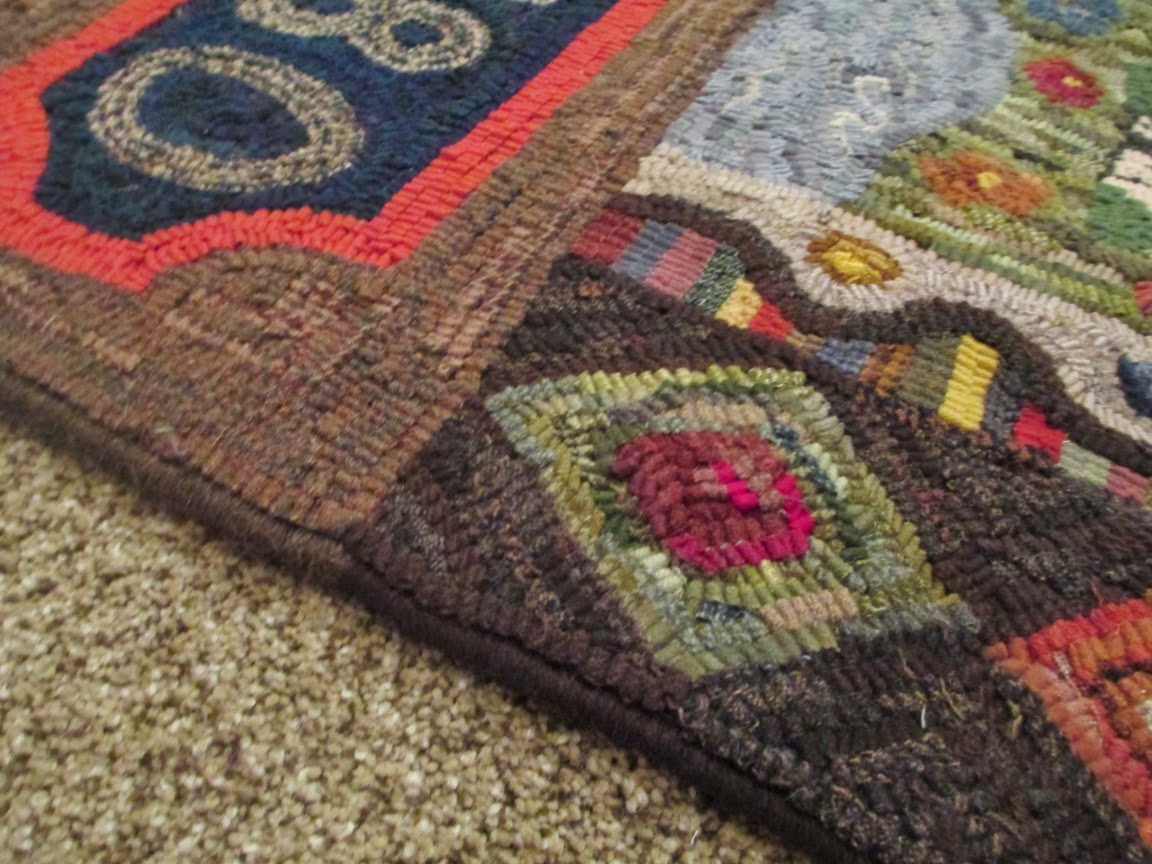 I think the two borders add a lot to the rug - they were fun to work on and used up a lot of my worms. 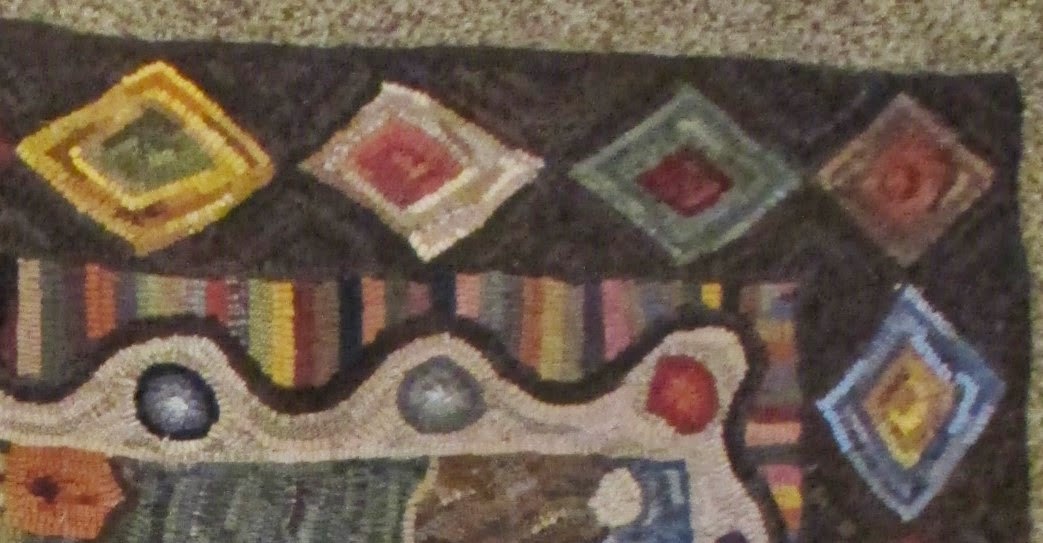 I drew all of the motifs for this rug freehand, which captures the folk art feel I wanted for it. I might tweak a few things still, but for all intents and purposes it's DONE! What a journey it's been!

It's amazing! I love it! Miss living by you but don't miss the trains.

Gayle, this is without a doubt, a true folk art piece for future museums.
I'd love to get onto doing my little rug that I started 5 years ago, maybe this winter. You've inspired me and that's a good thing.
Love your explanation of how you decided how to include the very things in your life that are the most important. Thank you!

WooHoo, congrats on this completion, Gayle. It is wonderful! Thanks for sharing the inspiration behind the different designs you used. Where will you display it?
You should be very proud! It needs to be in a magazine or something!

What a great accomplishment. Your rug is beautiful.

Great rug and what a wonderful piece of family history to pass on to your grandchildren in the future. Well done on your finish...so whats next?!

Gayle your rug is wonderful!! What a great family heirloom!!! Hang it somewhere for all to see!

Gayle I think it is spectacular and wins a Blue Ribbon in my book. Oh but what memories and folk art you are providing for your family. I've got news for you gal, if you have more than one child you better get busy making your next 5 year rug.

Gayle,
What a wonderful rug. Thanks for explaining all the motifs. It sure is a biggie.
I agree with Saundra. You'd better get busy hooking two more.
Hugs :)
Lauren

Congratulations on completing your beautiful family heirloom rug. It's beautifully done and very much folk art. A great story to go with it.

Will you be making make a label to explain the story your rug represents?

A wonderful finish. I did a quilt that tells a story. You did a rug and in great detail, Will this grace a floor in your home?

It's wonderful--don't change a thing--it's your story

What a journey both in your life and in the hooking of your family rug! Woohoo. You did and it looks totally awesome. It will be a wonderful family heirloom.

Hi Gayle,
Wow! You should be very proud of this spectacular finish! That is a very large rug and wonderful folk art!
The kids will have to share it...LOL!! Have you thought of entering it in Celebrations magazine?
Hugs!!
Cathy G

Wow Gayle, this is awsome! I think it should win a price! This rug tells so much about love and family, it is amazing and beautiful. I hope it will stay in the family and be loved for a long, long time!

It's totally awesome, Gayle. I wouldn't change a thing. This will become a family heirloom for sure.

Gayle your rug is spectacular! worth all the time it took to get it right...wish I could remember everyone who finished their "Big Honking Rugs"...Karin, Merrie and Jo are all I can remember...sure there are more...

Love your rug. Every bit of it. But I especially love your borders. My he scalloped stripes and diamonds. Great rug!

Your rug is lovely, Gayle, so whimsical and charming. I see your quilting interest in the borders, which really enhance the rug. Congratulations on finishing it! Sarah

Well done! And thanks for sharing the inspiration.

I think it could win an award Gayle! It's wonderful!! Congrats on finishing your rug. Lori

Me and My Stitches said...

What a great story your rug tells! Love it and all of the little pieces of your family!

Congratulations on finishing your rug! The award you have already won with this rug is that it is now a family treasure. Would love to see where it will be displayed in your home.

Absolutely wonderful and so personal!

Love it! What a tribute to your family.

I love the story of your life in the rug! It is absolutely perfect! Such a great heirloom for your family and such an accomplishment for you!

What an incredible heirloom, Gayle !
I'm glad you told us the story behind the design. It is beautiful and you must feel grand at having it now completed;)
Rose

What a labor of love and a family heirloom! It is gorgeous Gayle! Congrats on the finish.

A treasure and beautiful, too. Well done!

Love your rug. What a nice piece of folk art that commemorates your family and life. Job well done.

Gayle, that is amazing. I love it so very much. What a wonderful family keepsake.

It's a wonderful rug!

So beautiful! I love it! Now you need to make a quilt to match! Do you hang your rugs or put them on the floor? I've done some catching up by reading lots of your recent posts...you are a busy girl! Keep it up...everything looks great!

I think it is just lovely. I love the story behind every design.
I think you did such a wonderful job and that you kept at it for five years. I love the colors.