Several weeks ago I found a knit skirt at the thrift store made of 100% lambswool and I just now got around to doing what I had planned for it. I decided to make a scarf (now that winter is over?) but I wanted to add some texture to it. I had seen this technique used ages ago - can't remember where - and decided to give it a try. This picture shows how I tied pennies in a random pattern to the wool, and it's all ready to go into the washing machine and dryer for felting. The idea is that the wool stretched over the pennies will stay the same size, while the other areas will shrink. I raided hubby change jar for this and used at least 100 pennies! 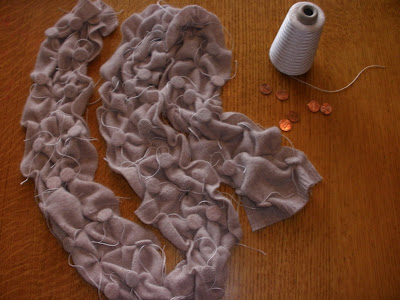 Below shows the finished product. The pennies wore holes in some of the wool as it was tumbled around so that wasn't good, but I do like the bubbly effect they made. Instead of doing them all on one side I alternated front and back so it would be reversible. I'm not thrilled with the outcome, but it was fun to play with. 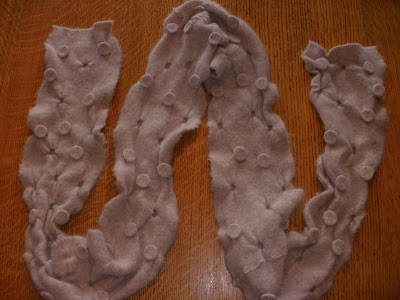 A close up of the bubbles. 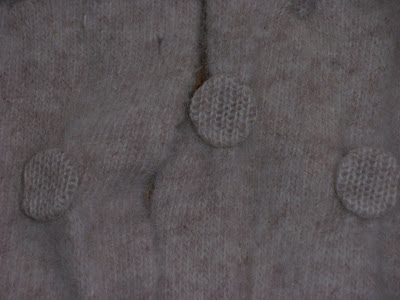 Edited to add: I found out where I had seen this technique done before - please visit Betz White's blog to see more about it. She's the queen of all things made using felted sweaters.......
Posted by Gayle at 7:04 PM 10 comments:

A Bit of Dyeing

Yesterday Marliss came over and I gave her a mini lesson on dyeing wool for her rugs.  She's been buying some clothing from the thrift stores, and a little bit off the bolt at the fabric store.We did some in a pot on the stove, some spot dyeing in the microwave, and even some in the crock pot. I forgot to take pictures of her final products, but here is some of the wool that I did for myself after she left. Golds/mustards and reds - yummy! 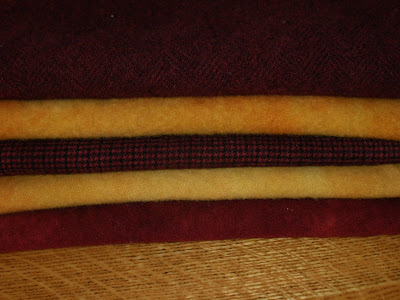 And I thought I'd share how I store my Cushings dye packets. They are filed alphabetically by the name of the color.  I buy these little wooden crates at the thrift store - they were made to hold cassette tapes and they're just the perfect size for the dye - in fact the kool aid packages fit right in there too - sometimes I like to play with that when I dye. These two crates are full now - I might have to go on the hunt for another one! 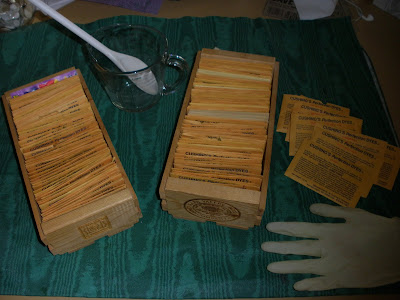 Eileen has been working on this Emma Lou designed rug for awhile and is now approaching the finish line. I love that she's incorporated some wool roving into the fall colored trees, and also used some for the smoke coming out of the chimney. She's the most knowledgable person I know about all things wool - she spins and knits as well as hooks - so much talent in one person - and always willing to share and help in any way she can! 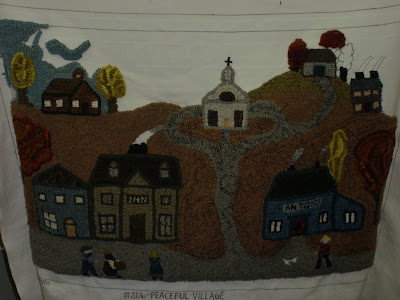 This is Tonia's newest project - love the colors in this rooster - the teal and turquoise just pop against the others. 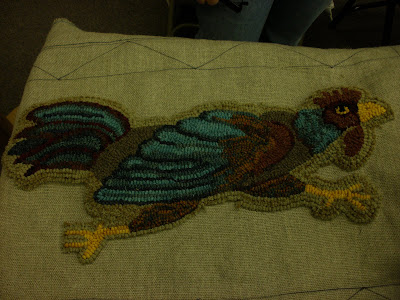 Tonia has only been hooking rugs for about six months now and she has already finished four or five projects. Her latest is this penny rug that measures 4' x 6" - I think it took her only about a month from start to finish! I can't believe how fast she is - sure wish I could get some of her speed. This is a good thing since I know she has a really long list of future projects in mind! I shared photos of her beautiful home filled with antiques a few months ago, and this rug will look right at home in it's new spot! Good job Tonia! 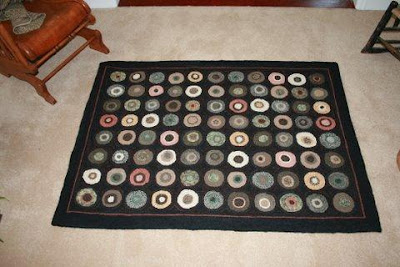