Over the weekend I was fortunate to attend a three day rug hooking workshop sponsored by the Utah Rug & Fiber Guild. This year our national teacher was Donna Hrkman from Dayton Ohio - what a delightful lady! We met at a local quilt store. 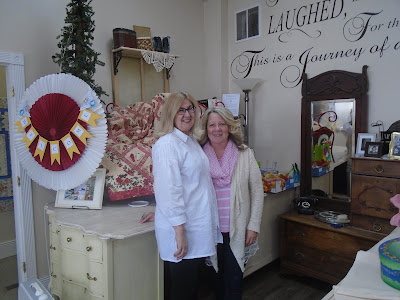 I chose to work on a landscape rug of a red rock slot canyon in Southern Utah - an area that my husband absolutely adores. I'm hoping that my project will turn out well enough that I can have it mounted on stretcher bars and he will want to hang it in his office at work. If not, oh well! I worked from a photograph so you can see what it's supposed to look like when finished. It's only 18" square, so not a huge rug. 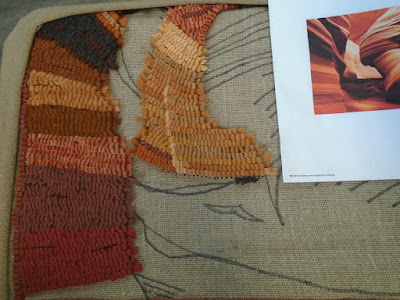 The Guild has always done a great job on prizes & treats for the attendees. This time all 20 people in the class received one of these adorable sheep! He's quite large - can you imagine how much work it was to make so many of these? Love him! 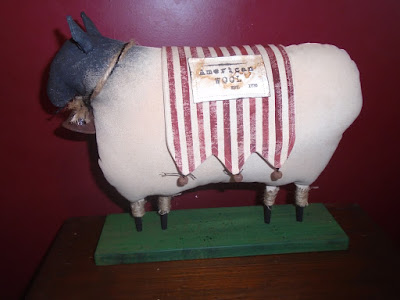 This rich, chocolate cupcake was sooooo delicious to eat - and cute to look at with that little face! 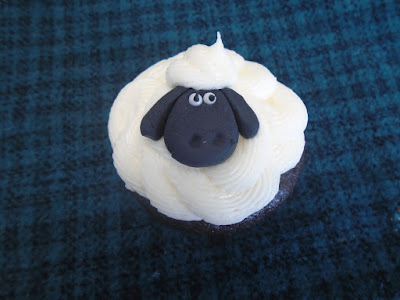 I recently visited my friend Kay who is hooking a rug depicting a church that is right next door to her home. She mentioned that she thought she'd like to make it have stained glass in the windows, so this morning I got out my electric frying pan and attempted to make dye some wool for her that would work as a surprise. 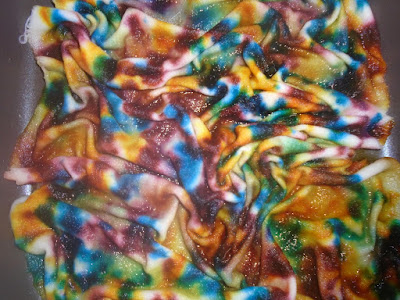 I used only three colors of dye - red, blue & yellow - hoping that they would run together to create orange, purple and green.Turned out kinda dark and muddy, but she might like it anyway. I'm crossing my fingers...... maybe I should have done rows of color instead? 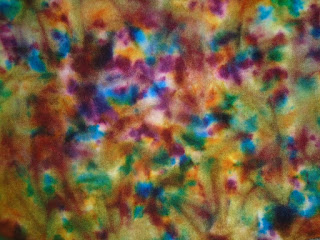 Donna is well known for her portrait rugs, and that is what most of the gals chose to hook during the workshop. After three days solid of working on their projects, most of them had two eyes hooked - which is why I wasn't terribly interested in doing faces - too time intensive for my tastes - plus they had to use very, very narrow cuts of wool to get the details right - a #3 cut.  Jill is doing Marie Antoinette - a long term project I imagine. 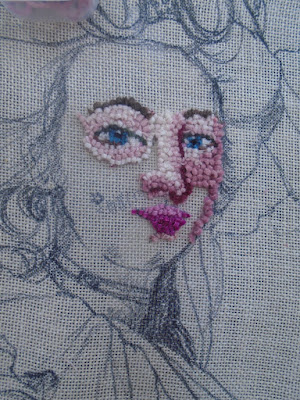 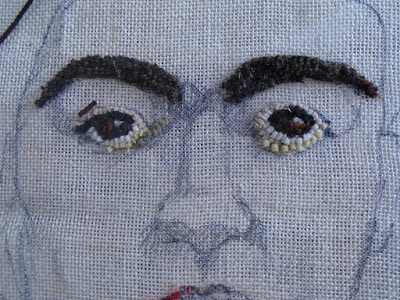 Mary worked from a photograph of her granddaughter...... 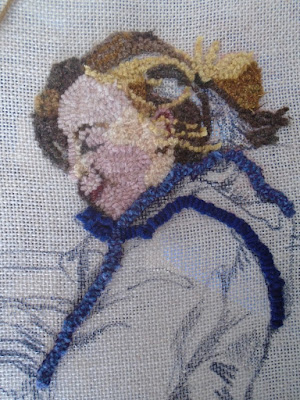 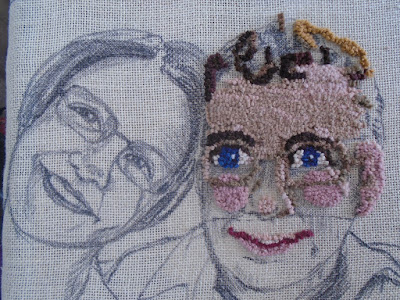 Brynne recently moved here from CA where she was active with a rug group there. She started an angel rug - might be a weathervane? It's a big one. 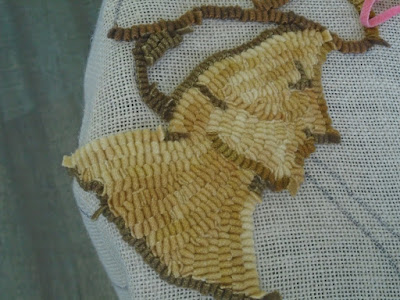 Brenda is hooking a sheep that will eventually become a small handbag. 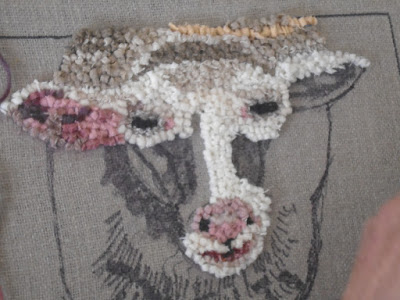 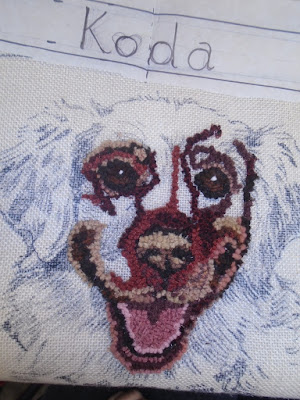 Tonia worked on one of Donna's patterns of a steam punk pumpkin...... 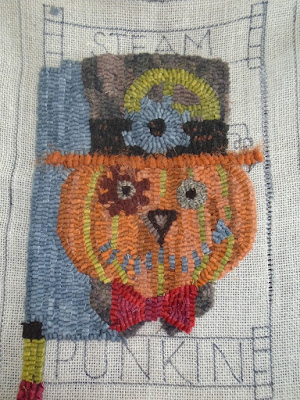 Cheryl also bought a pattern from Donna, but she loves to make sculpted rugs, so this dog has a muzzle sticking out a couple inches from the surface of the rug - he also has a steam punk vibe.... 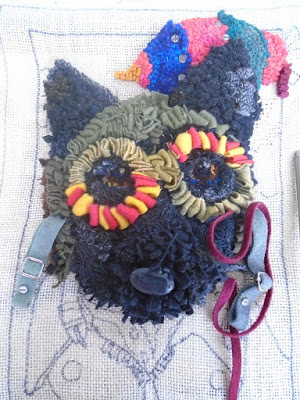 Terri was hooking a rooster in varied colors - one of Donna's patterns also. 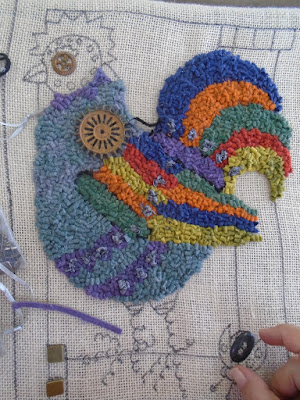 Marianne drew her own pattern of her sister with a cat and a computer - her two favorite things! 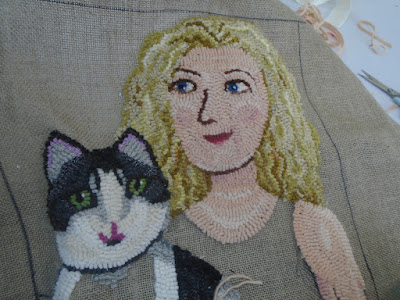 Coralee is doing a picture of a town on the Oregon coast she visited - great weathered wood. 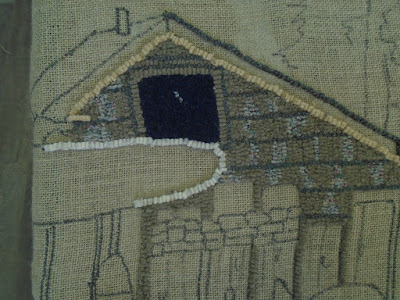 Jeanette is hooking a rug to go on a window seat near where her grandchildren play when they come to visit - such fun bright colors for the three elephants! 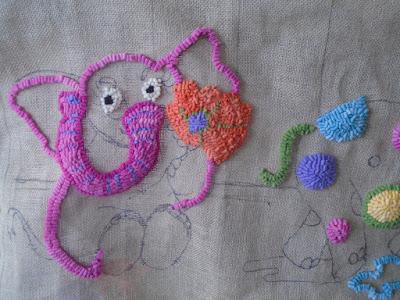 Sandy got a whale hooked, but there is much much more to the pattern she's doing - she works quickly so I'm looking forward to seeing this when we meet again next week - it might even be done by then! LOL 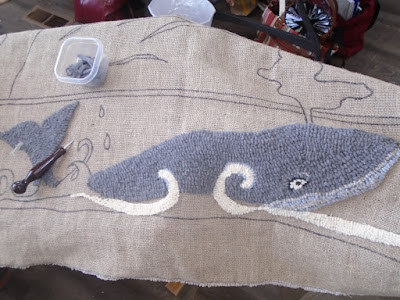 Pat is making a footstool - she's started with these coiled circles and will hook around them until the surface is finished. Can't wait to see this one! 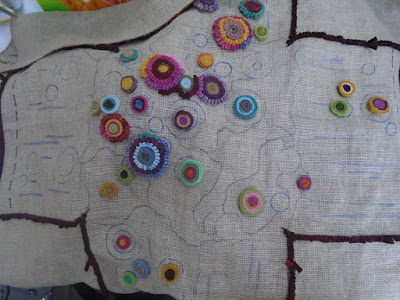 There was a small rug show at the end of the class where I snapped the pictures below - lots of talent in our group! 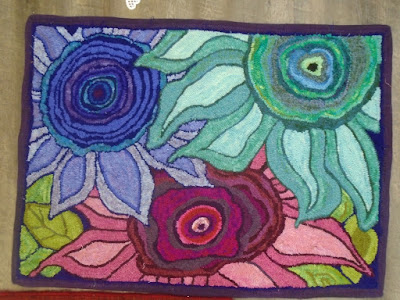 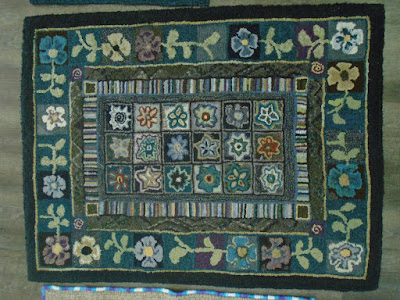 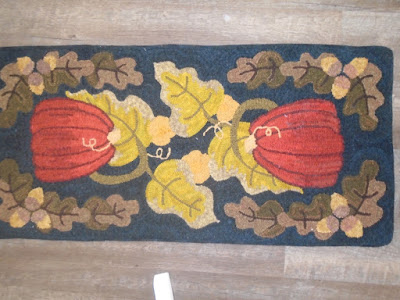 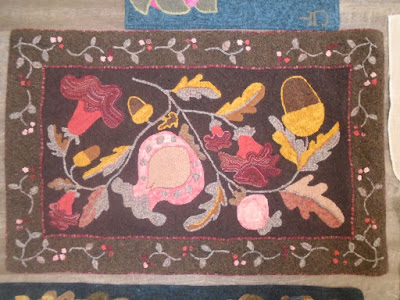 Over President's Day weekend we spent some time in St. George Utah - usually we escape there for the warmer temperatures, but not this time. We still had a good time - drove out to Glitter Mountain and collected these shards of rock that look like clear glass - very cool! I like them displayed in this small rope bowl that I recently made. 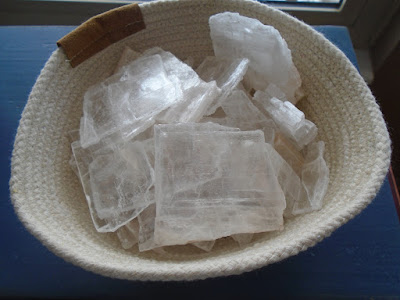 Hubby & I have had a new home built and it's nearly finished now - maybe two weeks till we close. After living in our current home for 37 years it's going to be quite an adjustment for us - and the physical move will be quite an ordeal - especially my studio with it's supplies. But we're looking forward to it. Thankfully, we can take as long as we need since we won't be selling our old home until the move is complete - no pressure to hurry, hurry, hurry. It's only three miles away so that helps too. I haven't had a lot of time for reading blogs lately, so I'll go catch up with everyone now!
Posted by Gayle at 4:41 PM 18 comments: