You wouldn't think that two consecutive days of rug hooking would wear a person out, but they did me! To be fair, I guess it wasn't the actual hooking that was exhausting - you see, I drove quite a distance each day to get to the meetings, and since that takes me out of my usual stomping grounds, I stop at all my favorite and not often visited places on my trip back home. Thrift stores, antique stores, plant nurseries etc..... So tonight I'm really dragging. But it's so worth it in the end!

Our numbers were few for hooking today, but I snapped a couple pictures of in-progress rugs. This first one belongs to Arline - she's the only traditional hooker in the group. She recently returned from rug camp with Gene Shepherd at Cambria Pines in CA. Her teacher was Elizabeth Black, and she helped Arline capture the exact likeness of her two cats perfectly. The cat on the left is a Maine Coon and is very large. She's going to make these three rugs into dummy boards and display them in her house. The cat rugs are probably about 18" tall and she used lots of 3 and 4 cuts to make them. The geranium has proddy elements in it and is so realistic looking. 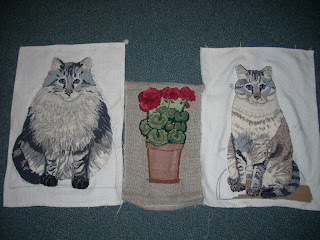 This next rug is Vicki's first one she's ever made. She based the design on a penny rug she purchased from a boutique and wanted to make a hooked pillow to go with it. She's been working steadily on it for quite awhile and it's excited to see that she's probably half done now! Great job for a first timer. 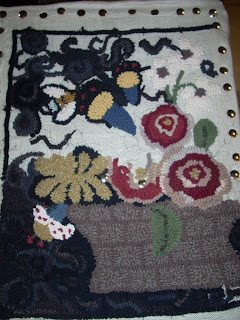 Yesterday, in my post about Sharon, I forgot to mention that she also knits. I don't think I've ever seen her wear a pair of socks that she didn't make herself and I meant to ask her to pull them all out so I could snap a picture of them. Fortunately, I had one still on my camera that I took during the winter when she modeled them for us at a meeting. The yarns that she uses are so fun! I've always thought it would be so hard to knit two socks and have them turn out exactly the same size, but she says she knits them both at the same time with special needles - clever, huh? 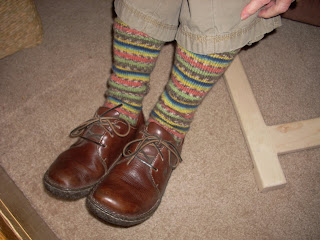 Linda - Behind My Red Door said...

Oh we must make those exrea stops when we are near them! It is 'green' after all to get the most use out of each gallon of gas, right??!!!

Hey Gayle! Thanks for visiting me! I am enjoying your blog. I love hooked rugs and have always wanted to learn. Maybe one day....

Anyway, please come back and visit me again. I'm adding you to my bloglist and will be back to see you.

Have a great day!

I love the socks! Very cute.

Those hooked rugs are incredible!

I bought the colored burlap at JoAnns. They have brown, tan, cream, and sage.