NOT My Favorite Thing!

My son is 21 years old and for the last four years he's been having a love affair with the beat-up truck that he drives (Big Blue). You would not believe all the stuff he's done to 'fix it up'! Last week he was on Spring Break from college and decided it was time to tackle the upholstery in the cab. Of course, I was recruited to 'help' with the project. I refused at first, but he wore me down and I finally said I'd 'help' - just to make him stop nagging me! LOL So, he pulled the entire seat out of the truck and brought it in the house. Then he dismantled it and removed the fabric. Instead of replacing the entire piece, he decided to just sew some new fabric over the sections that had received the most wear & tear from use. We call him our 'redneck' - and he lived up to his name by choosing some hunting camoflauge fabric to use. I slipped a pattern off of the seat and edged it in some contrasting piping (as instructed). He wanted to have our family crest incorporated into the project, so I directed him to a neighbor who has an embroidery business and she did a great job on that for him. My home sewing machine proved much too small and inadequate to manipulate this massive piece of fabric under the needle, so I sent him to another neighbor who has a long arm quilting machine - where he spent 3 hours with her doing that part. He came home and had to finish some of the edges by hand. It's not perfect, but he was totally thrilled with the way it all turned out. I was SO happy to have it done and out of my house cuz there was grit and grime falling onto every surface it came in contact with - like the living room floor, dining room table, and kitchen counter. UGH! He finally promised me that the next time he needs to have this done, he will pay a professional lots of money to do it! 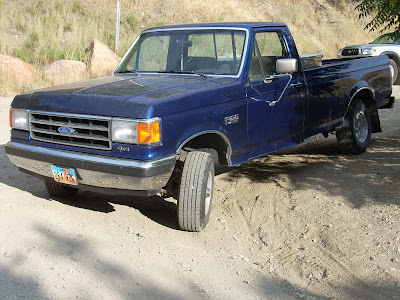 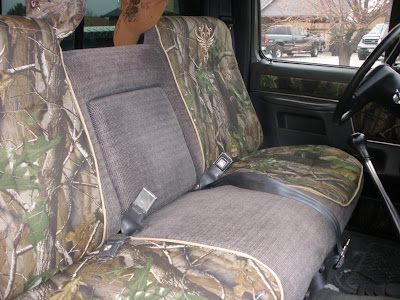 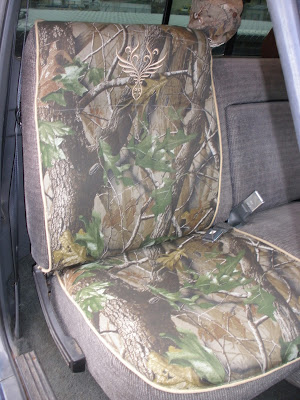 A few weeks previous, he replaced the fabric on the headliner of the truck and added a Browning logo that he covered with the same camo fabric. 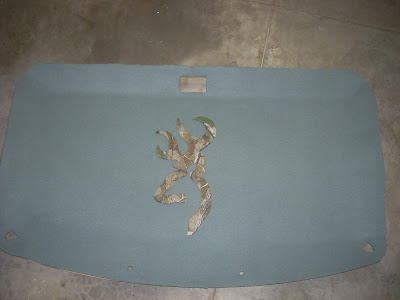 I'll leave you with a couple pictures of the finished seat - and ask a question: What's the most unusual thing that YOU'VE ever sewn?
Posted by Gayle at 9:39 PM

You're such a great mom for taking on that project. Sorry to say I haven't sewn anything too weird. Mimi

Wow! I don't think that I ever considered tackling this kind of project! You guys are brave. It came out great though!
Courtney

What a wonderful job, those seats look awesome....well...you know yu wanted to help him...HA!! What a fun project together.

Looks like you did a great job on those seats!! When my boys were little I made them winter coats out of their dad's wool navy uniforms!! Not too weird but defintely a job!

Gayle, they turned out great! I am a sewer and I am not sure I would tackle that either!
Cammie

Wow, Gayle,I'm impressed! Looks like after that project you can do just about anything!

Gayle ~
WOW! I am impressed. I would not choose camo fabric, but they came out great ~ a fine job done by one and all.
Pug hugs :)
Lauren

he would fit in just right around hear the boys hear are hunting and fishing boys. I like the seat it looks great.
Cathy

Boys are funny. The weirdest thing I have sewn is a quilt. I mean who cuts apart perfectly good fabric into little pieces and then puts it together again? Oh, yea.....we do!

My FIL asked me once to make a hammock, he had the framework and it would be so easy..........UHHH. The extra heavy fabric was problematic from the start, but we finally had success. I will never make another hammock...Your son did a great job, he probably learned more about himself than you realize, kids needs projects like this to reach their potential. Great Job, and I like his Truck!
Wendy

I sewed a new rear window into our Corvair convertible at least twice! No one told me I couldn't...and I didn't know any better, lol.

The seats turned out awesome!

My boy would "die" for that seat! He has a truck identical to your sons only red. He loves Mossy Oak, has the floor mats, a pistol grip on the shifter, etc. We called it a rust bucket, talk about offended! Right now it's parked we're scavenging to find a shock tower for it! Nothing like a boy and his truck!! PS. I will NOT show him the seat pics!!! Smiles!!

So I'm assuming he has a new appreciation for all that you do? Lol! Those seats turned out awesome! Everyone involved did a great job on them!