A Quilt For My Mom

I finally finished the quilt I started back in October - it's a gift for my mom so she can snuggle under it while watching TV on cold winter nights. It's lap sized  - so just right to drape over the back of the couch during the day without taking up too much room or being in the way. 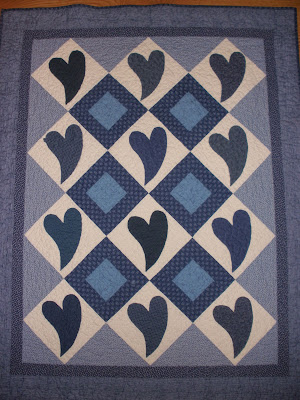 I quilted it on my sewing machine and just did an allover stippling design, which might be kinda boring, but gets the job done. I put it in the washer & dryer before sending it to her - I love the way the cotton batting shrinks up and makes it all scrunchy on the surface of the quilt. 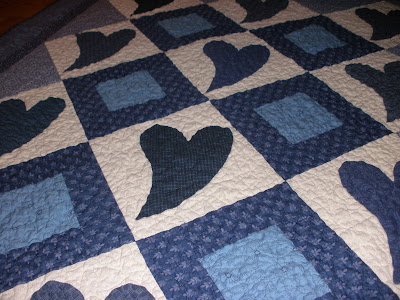 I sent it Priority Mail on Thursday and it arrived on Saturday - she sent me an email to thank me for it and I could tell she was really touched. In fact, she thinks she might like to be buried with this when the time comes - can you imagine?  It was just a smallish project for me to make, but how wonderful that it means so much to her as the receiver. I love that handmade gifts carry so much meaning, don't you? 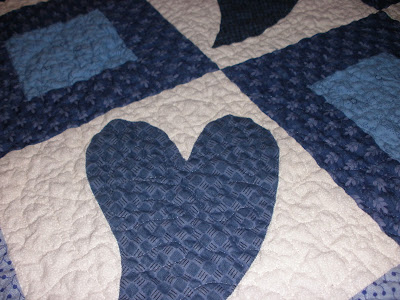 ﻿Her birthday is the end of February, and I thought about saving it until then before sending it to her, but then I decided that there are a lot of cold nights between now and then - so I ended up sending it to her as a 'just because' gift - - - -
Posted by Gayle at 12:21 PM

What a beautiful gift, and I agree that the puckering that washing produces makes a quilt so loveable! It should keep Mom nice and warm.

That is just the sweetest thing Gayle! Love the hearts and the quilting. Nothing says how much you care for someone than making something so warm and cozy for them!
Cathy G
❤ ❤ ❤ ❤

And it's a beautiful "just because" gift. I think you sent it at the right time with it being so cold! You did a wonderful job on it - quilting and everything!

What a lovely quilt, your mom will love it.

Awww, such a sweet post. I'm so happy you gave it to your mom early, and what a joy to hear her say what she did about taking it with her. I LOVE it!!!! You did a beautiful job and I love the scrunchy affect from washing it. Just great!

What a sweet idea your mom is very lucky, I love my quilts I even have a old beat-up one by the couch it's dog and child proof.

It turned out beautiful! I'm glad you went ahead and sent it to her so she can be enjoying it now. I totally agree with you... I love how the cotton batting shrinks up and makes it all scrunchy looking, it has a nice texture to it.

What a lovely gift, Gayle! I love how scrunchy quilts look after being washed, too. This is a beauty!

Gayle ~
What a beautiful "just because" gift, one I'm sure she will cherish always.
How cool that your mom has email :)
Hugs :)
Lauren

Its a sweet quilt and you know your mom will be thinking of you as she snuggles with it this winter.

What a beautiful quilt!!

funny.... wished wrinkled and crinkled look good on me!

Beautiful! I love blue and love hearts too. I am sure your mom will love it!