Hubby & I have lived in our home for 30 years now. It's met all our needs wonderfully, but just recently the kitchen was starting to show it's age with cabinets looking dated & worn. We decided it was time for a facelift! We like doing things like this ourselves because the cost is so much less, and because we enjoy it. This project stretched on much longer than we had anticipated, but in the end we got it finished and are really, really pleased with the result which you can see here. 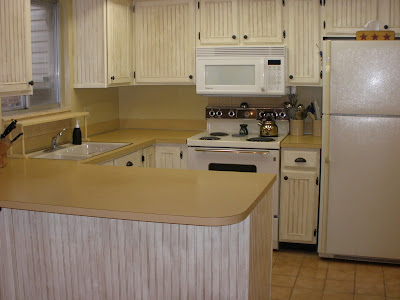 Here a picture of the (messy) kitchen before we started - I snapped this photo just before we removed the cabinet doors. The hinges were worn out and the door in the corner wouldn't even close anymore. 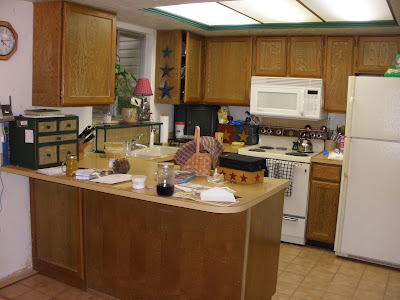 Some of the walls had grasscloth on them, and after being there 25+ years it was a real chore to remove it. 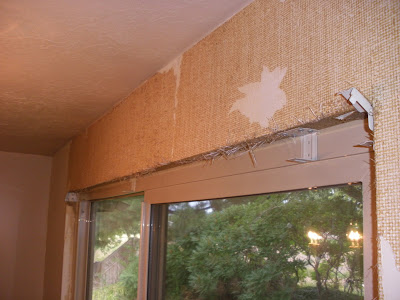 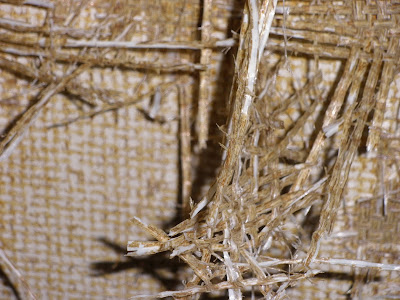 Hubby had to do a lot of repairs to the sheetrock before we could start painting the walls because in removing the wallpaper there was a lot of damage that occured. 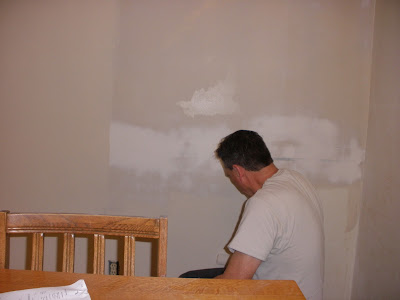 The cabinet doors after 30 years of use: 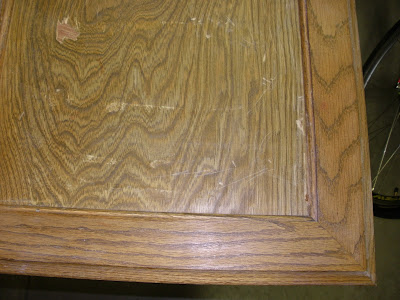 The cabinet doors after the beadboard was added to the center panels and moulding was added around the edge: 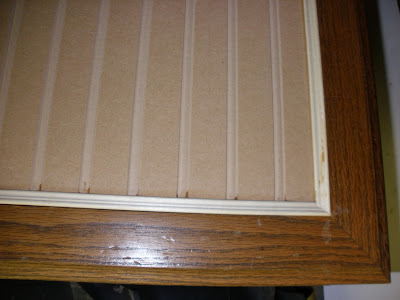 The cabinet doors after being painted: 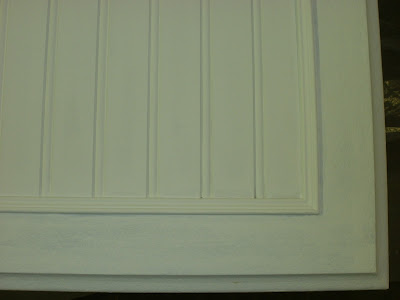 The cabinet doors after the glaze was applied: 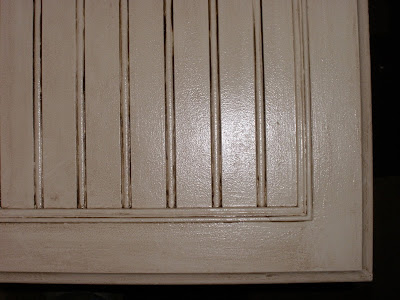 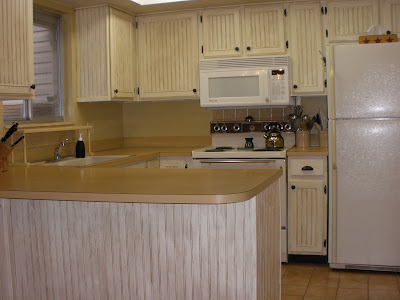 New drawer pulls cuz we've never had any before.... 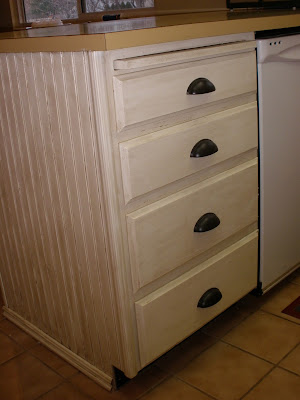 ......and new hinges and door knobs. The oil rubbed bronze is a nice contrast to the light colored paint. 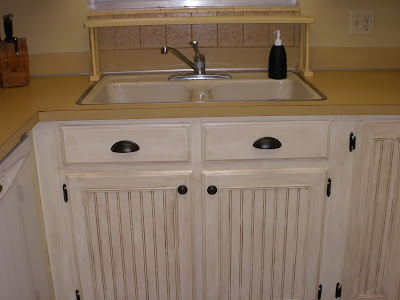 ﻿The kitchen seems really monochromatic now so we're looking at new countertops (pricey!) and would love to replace the current appliances with new black ones (not for awhile). I haven't decided what accent color to put in there yet, but I'm leaning towards some kind of red.
So anyway, there ya have it - a quick tour from start to nearly-finished. We're loving it and sometimes it doesn't even seem like the same space!
Posted by Gayle at 6:02 PM

I so want to give my kitchen cabinets a facelift so when I saw your post I just had to check it out. Your new cabinets are beautiful. You all done a wonderful job. Be proud of them. Blessings!

It's looking great. It does give your mood a lift when you do a Reno so January was a perfect month to do it.

Gayle ~
Your kitchen looks fantastic! Was the beadboard added to the old doors? I'm sure it was a lot of work but totally worth it! One of these days I will do something in my kitchen, but I just don't know where to start and it's so tiny!
Doing any hooking?
Pug hugs :)
Lauren

Oh Gayle! What a beautiful kitchen you have now! Ours needs it so badly too. Wonder when that will happen? LOL! I love beadboard and how you used it!
It looks so bright and airy now! If I had a kitchen like that I might actually try to bake something once in awhile! LOL
Great job and thanks for letting us see!
Cathy G

Wow Gayle,
What a change! I love it. Who would have thought? That really was a fantastic idea and it looks wonderful..
Tisha

Looks fantastic! Did you use a primer first? How did you attach the beadboard and moulding? I have been wanting to paint my cabinets for a long time!

Hi, I love the cabinets. There is a paint that you can use on counter tops. I have not used it but have used their paint on other things and I love it. Go here for the info, they are also very helpful if you have questions, just call.
http://www.caromalcolours.com/store.php
Blessings,
Lorna

Ohhhhh that is just awesome, I am sure you are in heaven with this re do.

What a gorgeous "new" kitchen you have now! So you just refurbished your old cabinet doors? Or got all new ones?

What a wonderful face lift. It makes such a difference when you do a "new" kitchen - let's face it, we spend so much of our lives in there, it's the room that deserves it the most. And so do we. When we did our renovation, everything was fantastic, but my kitchen was the biggest improvement of all (and my studio). I didn't get to say I did it myself, but I could say "I picked it myself" LOL
Go for the countertop - they will be the crowning glory for sure.

What a transformation!! Excited to see it in person, now that you got some free time come help me get my living room done??

way to go with your re-do!! Love how you did it yourselves. great transformation.. Love the drawer pulls too :)

I love your kitchen..the cabinets turned out wonderful!! My next project is my countertops!! They are in good shape, just way outdated. If your are to, heres a link to what I think Im going to try http://www.gianigranite.com/index.html . Wonderful job on everything!!
Blessings,
Anne

Looks beyond wonderful, Gayle! Great job by you and your husband.

I agree...red would be an awesome accent color.

WoW Gayle, that really is a great transformation!

You and hubby, well...ya done good!

It looks wonderful! Red would be a nice accent color. Great job!

Gayle,
You did a wonderful job on your kitchen. It looks awesome! I want black appliances too.

I like the idea you had of using beadboard....turned out good. Trish

Gayle: Don't you just love painted beadboard! What a wonderful re-do of your kitchen and yes, red would be a great accent to your colors. You could also use a little black for punch. I have the same hardware in my kitchen and everyone loves 'em. Hugs, Joy

Great idea with redoing the cupboards that way. I really like the glaze and your drawer pullls are great.
cathy

WOW!! What a transformation! A lot of work but definitely worth it in the end! The cabinets are beautiful with the beadboard and I absolutely love the glaze! Definitely love the new drawer pulls too! Oil rubbed bronze is our new favorite. Every time we make a trip to Lowe's, we buy vent registers, plug/plates, or switch/plates in that color to slowly change out everything in our home. Have you thought about using Caromal Colours to paint your countertop?http://www.caromalcolours.com/. Yours looks like it's in great shape. I've heard some awesome testimonies about how this stuff works wonders on countertops and refrigerators among other things at a fraction of what it would cost to replace. Oh, and I think red would be an awesome accent color!

Your kitchen redo is amazing! I am inspired as I am looking forward to painting cabinets this summer. Thank you! You must be so pleased! ~Kelly

Amazing! I love the extra bit of trim inside the cabinet doors.

Oh, I used bead board paper on my uppers but not on the bottoms. I was holding out for new lower cabinets, but since Honey (the husband) retired that is probably out.
Like your broken hinged door, all my lowers just don't want to shut anymore! And my laminate counter tops have seen better days.
I'm toying with the idea of new cupboard doors on the bottom-- and painting the counter tops...may follow some of the links provided in your comments. I still need to paint my uppers that have beadboard wallpaper... I'm indecisive, I tell ya!

Your kitchen looks great, maybe you could paint your counters? like others have suggested. Best of luck to you...